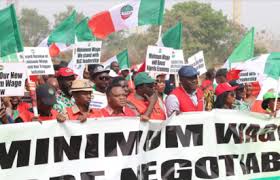 From the Nigeria Labour Congress (NLC) came yesterday a warning that any state that dithers over the negotiation of the consequential adjustment of the new minimum wage risks an unprecedented industrial crisis.

The warning came as the congress raised a standing committee to monitor the negotiation of consequential adjustment of the minimum wage in the 36 states, including Abuja.

The General Secretary of NLC, Emmanuel Ugboaja, told The Guardian in Abuja that the organised labour would not accept tokenism from any state governor.

He faulted the position of the Nigeria Governors’ Forum (NGF) that the Federal Government cannot dictate to them on how the consequential adjustment should affect their workers. Ugboaja asked the governors to explain where they had been since April 18, 2019 when President Muhammadu Buhari signed the minimum wage bill into law, that they did not speak to the issue until now.

“So, it is now that the governors suddenly realised that Nigeria practices federalism? Where have they been since April 18, 2019 when President Buhari signed the minimum wage bill into law? Why have they not begun the process of negotiation of consequential adjustment in their states? Why did they wait for the Federal Government to finish negotiation with the national leadership of the organised labour before initiating theirs? Why didn’t they invite workers for negotiation in their states since?”

Ugboaja threatened that the two trade centres in the country would adopt what he called ‘standard trade union response’ in any state that is reluctant to engage in negotiation.

“We believe that state governors are honourable people that would uphold the constitution of the Federal Republic of Nigeria. To this end, we are sure that no state governor will break the law of this country, and knowing that the minimum wage is a law, they would respect its tenets. But we also know that some governors may want to test the resolve of the organised labour. For those, we would adopt the standard trade union response. Any governor that is worthy of that sobriquet should know that salary structures worldwide have pillars that are globally defined.”

Ugboaja insisted that the figures that would be arrived at must be borne out of Collective Bargaining Agreement (CBA) after due negotiation with various state councils of both the Trade Union Congress (TUC) and NLC.

He said: “The leadership of congress has empanelled a standing committee to monitor the negotiation of consequential adjustment at the state level. This is to ensure that all the parameters are complied with.”

He added that the leadership of the organised labour had directed its state councils to take steps towards getting their states to begin negotiation on the consequential adjustment that must not be awarded unilaterally by the governors.

“We have directed all our state councils to begin the process of negotiation. We have made it clear to them that we are not going to accept awarded consequential adjustment by any state governor that is not a product of collective bargaining agreement. Workers are not slaves and we will not accept being treated as such,” he said.

The Director General of the National Youth Service Corps (NYSC), Brigadier-General Shuaibu Ibrahim, said the monthly allowance of corps members was tied to the national minimum wage and any hike would depend on the new wage.

The DG, who disclosed this at a meeting of NYSC top management and representatives of state governments yesterday in Abuja, confirmed that corps members would enjoy the new minimum wage of N30,000.

Corps members receive N19, 800 at the moment as monthly emolument by the Federal Government for serving Nigeria for one year. Ibrahim said the allowance increment would enable corps members to perform better during the one-year compulsory national service.